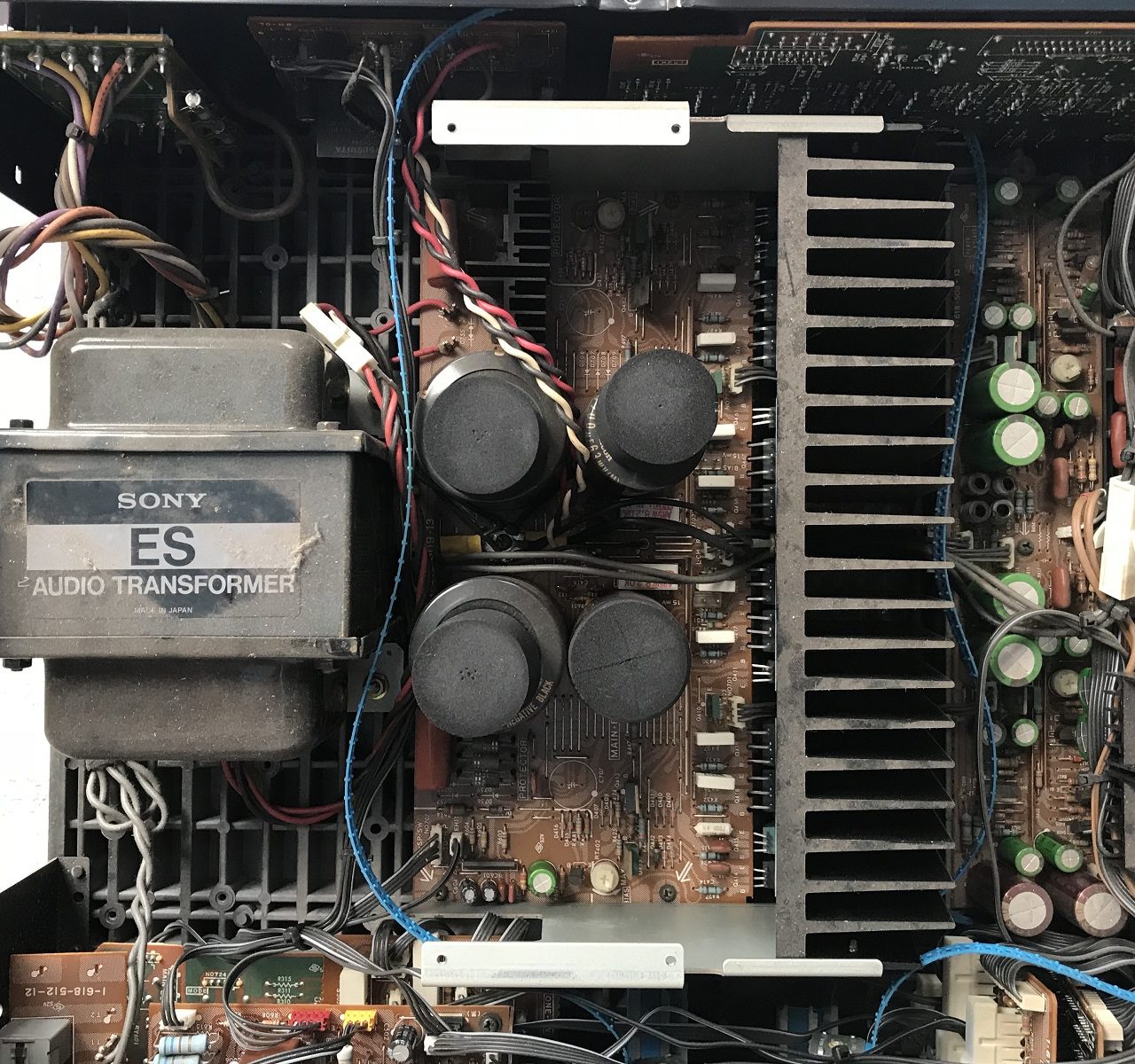 As a follow up to our previous article on speaker protection we thought it pertinent to look at this classic vintage amplifier, the Sony TA-F444ESX. Good in looks, solid in build and of course exceptional audio.

This amplifier is from the ESX series and appeals because of the very low noise and dynamic range. Even used on a pair of Sennheisser HD380s Promasters’ Toni Braxton’s Sex and Cigarettes took on new meaning compared to other vintage class amplifiers I have at my disposal,  Proton and Pioneer. This is not a review however, plenty is said about these amplifiers on the net.

The TA-F444ESX does not have a preamplifier before or after the volume and balance controls. It has an equalisation amplifier for turntable cartridges, hence the term Attentuation.  This seems to confuse some readers.  Attentuation rather than amplification – the power amplifier has enough gain of course but one needs to also be aware that most amplifiers when receiving a line signal already has enough signal to drive a power amplifier without further voltage amplification. Nowadays this would apply to your PC output.

Incredibly enough the test notebook I used was a VPCF1155FG, an antiquated unit which has quite good audio reproduction (Nvidia).

This unit was supposedly in protect mode.  Common enough Sony fault but this one was a curved ball problem, one I fear which could have been resolved rather by using LEDs (as in the 700 series)  instead of bulbs.

Here was an interesting one – using the aux or CD input the amplifier worked but the red lamp stayed on, indicating protection on.  Not bothering to check all the controls first, found that the green lamp was faulty. Part number 1-518-518-41. Don’t bother, it’s no longer available. Q609 has +39V at it’s Collector and the voltage drop across R610 and R611 is equal to 19V giving a current flow of 95mA.  This is sufficient to drive an LED but also enough to burn it out.  Working around a 20mA draw for a Green/Red LED I put two LEDs in series for both Red and Green, bypassing them with a resistance to allow for these lamps to toggle from Red to Green.  I cannot remember what resistance I used but as there is about 6V on D502 Cathode and +20V on Q603 Collector these lamps would have been good for about 14V. 14/0.095 = 150 Ohms.  I used two 330 Ohms in parallel for each circuit as in schematic below – figure three.

The 470 Ohm (and I cannot recall whether I used 470 Ohms, it may have also been 330 Ohms (too lazy to open amplifier again) limits LED current. If you do not load the circuit properly with the two 330 Ohm resistors in parallel the lamps will not toggle and the Red LED will remain on.

I am sure there are the engineering types which have a better solution here but my aim was to get this amplifier up and running – there were other problems as well.

Other problems:  The regulated supply

On testing the amplifier I noticed the mono/stereo switch did not work, neither the tone controls.

The first thing one should check if this amplifier loses phono EQ pre-amplification and tone would be the heat test – feel the heatsinks of Q205 and Q255. They were ice cold.  Transistors Q205/255, Elect C209/259 and IC202 were faulty. Kaput! Although Q206 and Q256 tested the same I would not have put money on them. Actually I didn’t – they are no longer available. I tried a general op-amp NE5532 plus a BD239/240 combination but this was a dangerous assault on the output and I scrapped that very quickly.  I did not have any JFETs, neither the original IC so opted for a tried and tested version.

Resistor R701 has a voltage drop of 6.5V which equates to 6.5/120 or about 55mA.  Although there are far better ways going about a repair than what I did the problem will always be searching for parts which are non-available and starting the waiting game while the amplifier takes up space. Figure 5 shows the mod which is simple and works 100%.  The heatsinks run warm and the phono pre-amp works well.  There is noise with attentuation at the lowest but this is to be expected because there was no weighting on the input and of course this is a high gain stage.

Some notes are in order.  The BD239/240 are run at nearly their max VCEO – there are higher voltages types out there, like the originals.  Darlingtons may be a better fit for this but regulation is fine based on the fairly low Hfe of these transistors.

Do change the filter caps, they are prone to be dry based on the vintage of this amplifier.

I used a 1W Zener.  The load resistors for these Zeners do not run warm. 9.1 Ohm 1/2W resistor should be fine.

Tested this amplifier for about 6 hours and nothing blew up.  One thing that always scares me with these +60/-60V rails is the emphasis on regulation from here to +15/-15V – this is a substantial voltage drop and if the clamping protection circuit fails one could end up with quite a bit of damage. The voltage amplifier has enough fire retard resistors but not the EQ stage. I am not a design engineer but would have felt better if there was an additional secondary winding to feed linear regulators at a lower voltage.

This amplifier is vastly under-rated but fortunately there has been a huge increase in collectors of vintage gear looking for most audio equipment in the ES(ESX) series.  In typical seller behaviour this will push prices up.  As just a DIYer I would advise potential buyers to try to get their hands on a broken unit but in good cosmetic condition if you are looking for something affordable. A dead unit could be restored cheaply if you have the technical know how and understand that most of the active parts – the transistors may be now long obsolete. Even if the mains transformer is shot looking at what some of the collectors are paying for them – about R400.00 one could restore for about R1000.00.

Buying a unit such as this which is faulty and then sending in for repairs is often not cost effective, not from a part replacement point of view but labour time which can be upwards of three or four hours.