Power output is between 50 and 100W, depending on which chip is used, loading and power supply rail voltage.

Depending where these chips get purchased, prices vary from R100.00 upwards each, the 7293 being more expensive.

Both these audio chips are used in circuits where the configuration calls for bridging and parallel.  Some of the output powers are absolutely ludicrous, anything from 200W for one chip into 2 Ohms to 700W into 4 Ohms.  This is not going to happen folks.  You either bridge and keep to 8 Ohms using supply rail voltages designed for this or you parallel and drive higher outputs into loads smaller than 4 Ohms. Or of course (not a good idea), you parallel and bridge and drive huge currents through a 1 Ohm load. But never 700W into 4 Ohms.

Functional diagrams from the application notes:

Just like most chip amps these devices use a minimal of external components:

The application notes are very good, the circuit above is included as well as a PCB layout.  The more common >100W into 8 Ohms is shown below, a bridged mode amplifier using the TDA7294 but the more common 7293 can be used as well, just keep to below spec limits.

Bridging amplifier chips is a very common configuration but DIYers need to know the limitations.  As in the circuit above, running load values below 8 Ohms without the additional cooling and PSU capacity is inviting trouble.

Modifying the STR-DG500/600 and Protecting the speakers

The one issue I have picked up with the Sony amplifiers in this range is their ability not to switch on when there is high humidity. Many owners are not aware it’s a humidity problem and with all the functions these amps have one would have thought an LED indicating thus would have been relevant.

Actually there are quite a few amplifiers on the market which exhibit loudspeaker protection mode so it can be fairly common problem, I don’t like the idea of switched mode supplies and humidity though.   Use a hair dryer to get the engine running again.

The reason why one has protection to the speakers is usually due to one or both power stages going faulty and allowing DC through to the load.  Plus or minus 50V across a voice coil is going to cause a serious disruption to service – in some cases it’s after the damage to the speaker that the fuse blows.

The audio amplifier when switched on usually holds the speaker protection relay open, tests for DC, stabilises and then connects output signal to speaker load.

Assume the circuit Figure 3 is in active mode i.e. protected or has just been powered up.

How does it work:  Looking at Fig 2, R1, C1 and C2 makes a potential divider chain, the audio signal is passed through the rectifier D1~D4.  When the DC voltage starts climbing towards the switch on voltage of T1, the transistor conducts pulling down the base of T2 in figure 3, switching the Darlington T2 and T3 off, switching off the relay (or opening the circuit to the loudspeaker).

C3 and R3 have a time constant and acts as a switch on mute circuit.  When the circuit is powered up the capacitor keeps the base of T2 low, charging up through R2 until the devices T2 and T3 conduct, switching on the relay.

One problem which can rear it’s ugly head is that the relay contacts burn closed which may not then protect the speaker.  Figure three shows a circuit with a SPST relay which for most smaller amplifiers should be adequate but the proper way is to use a single pole dual throw relay and earth the NC contacts.  See the article on halfgaar.net.

Proper wiring for speaker protector – SPDT with NC to ground 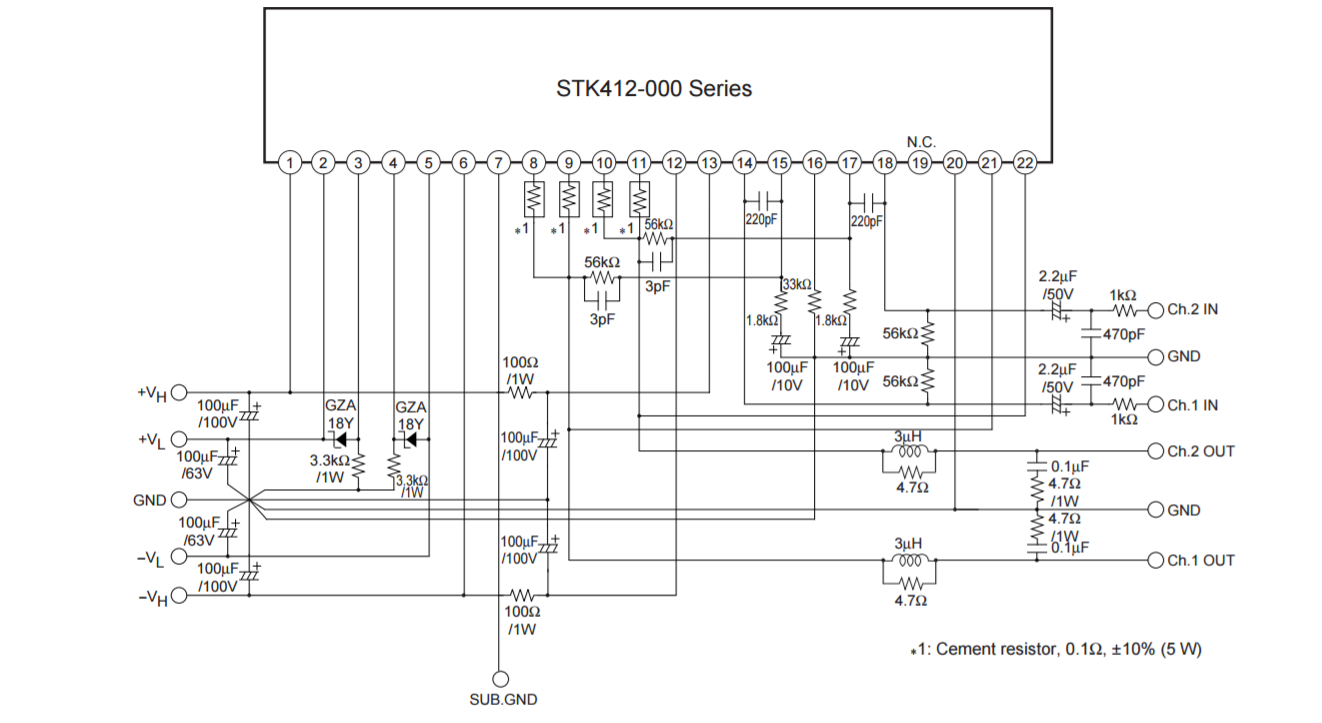 First of all, my own non-unique experience was based on the simplicity of the design compared to the rather surprising output quality, which was rather good.  But let’s kick off to the very beginning…

At Analog Ian we like to reminisce about the good old days, especially electronic component shops in Cape Town, one being the old Hamrads’ shop in Buitengracht Street, the starter shop for Ham radio enthusiasts,  a good selection of electronic components, test equipment and kits. Then we had Electronic Research Labs, ERS on the Foreshore, Electronics Supermarket in Burg Street, Cape Electronics, to name a few.  Where are they now?

Modern times calls for same measures and we have some of the bigger bulk resellers/wholesalers, Mantech and Communica being two of the bigger stores catering for small to large. As a DIYer we have some good online stores now and at Analog Ian we prefer to push potential clients towards these smaller stores hence our recognition of DIY Electronics, Pro-Tec (under the same roof in Durban), Yebo Electronics in Cape Town and Lantis in Pretoria. I list these companies, I try to buy from them time to time and their service is all exceptionally good. Readers are welcome to drop me a line however and tell me where their “go to store” is located.

Back to Chipamps and Gainclones:  None of these stores offer the LM3886, you will need to go to Mantech or Communica. Pricing is around R175.00 inclusive.  Bear in mind for a mono amplifier now, output of 50W you need to shell out about R200, which brings us to the question, why do it?

A cheaper solution – the STK series

It’s simple, it’s easy and in 99% of times it works. However, there is another angle, a cheaper angle:  Purchasing two of these including the power supply is going to set you back R600-R700 easily.  Somewhere on the website we wrote this highly intelligent article on the JVC 5042 which can be had for the measly sum of R500.00 through Gumtree, Cash Crusaders or most 2nd hand dealers.  It’s a better buy than the LM3886 because here you get two audio chips for the price of one. Ah-Ha! The smaller JVC5042 boasts two Sanyo STK412-430 ICs designed to put 100W into 8 Ohms.  Because each chip drives two channels you now have one spare. Not only do you have one spare, you have a power supply which can deliver 100W + 100W easily. In fact I have driven the STK412-430 into a Verboten load of 4 Ohms and ploughed Pink Floyd Pulse through the better part of a case of Amstels without anything going awry.

No, I don’t have anything against the LM3886, I just think pricing in South Africa is off the charts.  The STK412-430 (or any in the series you can get your hands on) makes a very good quality, reliable amplifier.  Don’t forget the PSU though, it is a device which requires dual rails.

An application diagram for the STK chipamp with shift rail PSUs is above or on the link, that of the PSU etc can be obtained from the manuals (easily downloaded on the net).  As  mentioned the JVC 5042 amp is often advertised on the net and if the amplifier is shot it would have been caused by chip failure or thermal link in power supply. Don’t offer more than R100.00 for such a unit.

It is not advisable to bridge these amplifiers because the JVC 5042 transformer will not handle the 200W+200W load. Yes, you will crank it.  Also, the linearity of the two amplifiers whilst rail shifting may give unpredictable results. The transformer secondary should be something like 40-20-0-20-40.  Two 42-21-0 transformers will also work in series. You do need the V(high) and V(low) rails. The voltages shown above was for the 5042.

ICs and their short-comings

Obviously one cannot tinker around inside the IC.  This may good for some and bad for others. You may not like the cross-over distortion.  Cannot tune the bias? This may be a good thing. These amplifiers use quite a hefty supply for the +/- V(H) so be warned about fiddling with the supply on.  It will give you a nasty kick,  and can be lethal.  You have been warned.

An IC has no user serviceable parts and will short out if reverse polarised at the supply rails. Do not attempt to play into a load it is not designed for. The output overload protection circuit works very well (don’t ask how I know).

This amplifier will easily dissipate more than 100W per channel when fully driven. Use a heatsink for the purpose, either the one supplied in the cabinet or ask technical counter for a spec’cd unit, possibly the popular 19488 offered by Mantech. 200mm run.

As a writer of some of the articles here we do try to keep the topic off common ground, throw in a bit of humour but give the reader some insight into components and circuit design. Op-amps we treat no differently.

Today we look at op-amps in general and specifically look at the brain child in 1968 of British Fairchild engineer, Dave Fullagar, the incredible 741 op-amp.

(note the charity work done by Mr. and Mrs. Fullager in South Africa)

In simple terms an operational amplifier is a DC coupled voltage amplifier which has a differential input and a single ended output.

The first tube op-amps were known as general purpose, high gain, DC coupled, inverting feedback amplifiers.  Although many experimenters see these devices as being rather simple it’s only when one looks at the GAP/R P65, an early discrete component solid state op-amp designed and built by Alan Pearlman, co founder Nexus,  that we note the complexity of the circuit. Pricing for the later P45 was in the region of U$120.00 each.

About the time of GAP/R startup Robert Page Burr and Thomas Brown started a company, Burr-Brown (of great audio fame) which was purchased out by Texas Instruments in 2000. Burr-Brown is known to manufacture some of the best quality operational amplifiers used in analog circuitry and DSP / electronic signal processing.

So what’s the interest in Op-Amps?

Well, recently we ran an article on the not-so-dreaded 4558.  I mean what’s the point of shooting down a 1970s chip in 2017 for poor performance? An Op-Amp has made out life easier, it’s made designing cheaper, it’s made audio simpler and there’s very little one cannot do with it. And it’s analogue. Well mostly, of course.

We can multi-vibrate, add, subtract, differentiate (or), compare (comparator), integrate (or), filter, chop, amplify, invert and …. the list goes on.  Op-amps are used in digital circuits as well as analogue. Op amps are temp stable. Gain calculations are simple, in the op-amp (741) image above the gain is equal to R2/R1. The output is in phase. Input to the (-) negative terminal inverts the phase.

What more can one want from a device which in open loop mode (without feedback resistors, gain can be anything from 10 000 to 100 000 (or higher).

Some historical and other facts

Tube negative feedback devices were in use pre 1940s.

The op-amp 709 was plagued by issues, instability, latching and self-destruction was not uncommon. The 741 was the fix.

The uA741 was commercialised in 1968, possibly the largest selling op-amp. They are also amongst the the cheapest – about R8.00 at Yebo.

The opamp cannot live in a world without feedback.

The input (voltages) will try to remain the same through the feedback path, if not, the output will swing towards the polarity of the most positive input e.g. if invert is high, then the output goes negative and vice versa. This forms the basis of many configurations.

Philbrick Archives – GAP/R and the commercialisation of opamps